I have just sent an update to Apple for review. It’s not one of the bigger releases ever but there’s some nice new stuff that I thought was well worth releasing:

The main new feature is the web browser. It’s limited in some respects but for people who are frustrated that it’s not possible to put a “Add to Delicious” button directly in Safari (if you want this functionality, please ask Apple) it may be a convenient option. 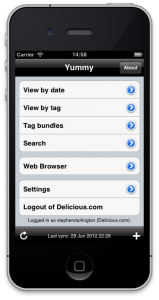 You can find the option in the middle of the main menu screen.

The Twitter functionality is not so much new functionality as a change. Yummy will use iOS5’s built-in Twitter client rather than its own if it’s present and configured. The advantage is that you can now post to multiple Twitter accounts and you only have to configure your Twitter settings once. If you’re still using an older version of iOS you won’t notice anything different.

Finally, I have restored the ability to run Yummy on iOS 3.1.3 which was accidentally removed in the last version. This is just a temporary reprieve, though. Apple’s most recent developer tools no longer support anything older than iOS 4.3 which means that soon I will have no choice but to set that as the minimum version supported by Yummy.

Still, this is a great new release to run on your five year old phone!