Last, but by no means least, in my programme to update all Wandle apps for iOS 7 is Yummy. 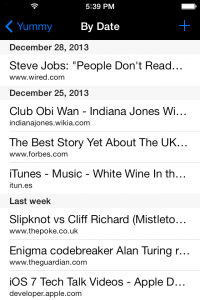 I’ll be the first to admit that it has taken a long time to arrive. Yummy is a deceptively large and complex app, and the fact that it was originally written for iPhone OS 2 in 2008 has not helped matters. This means that this update has had much more work “under the hood” that you can’t see than changes that you can see.

That’s not to say that there’s no Good Stuff. The “edit bookmark” screen has seen another facelift — moving the tabs to the top rather than the bottom of the screen, adding a character count for the notes.

I am currently evaluating the possibility of an update that is a better iOS 7 citizen, including background updates. This will likely involve dropping support for iOS 6 and below.

Keep an eye out for the new version on Twitter and, of course, your device.

Update (2 January 2014): Apple approved the update in almost record time and it’s not wending its way to the App Store.

Well I have checked this in mu iPhone 6OS and it is going smoothly for me as it is really providing me the efficient solutions. Yo dude has gotten much progress into it and as you are working on the OS 7 and want to more compatible for the updates of the latest operating system of the iPhone, I hope you can fix the all solutions and possible to work it smoothly.

The background syncing is REALLY CRUCIAL. Especially for the first HUGE sync since you can literally do NOTHING but sit there and stare at an uninteresting, unchanging page. I bought Yummy ages ago and still have yet to actually use it because I always forget to do that sync when I’m doing other things and I have NO patience or time for just sitting there watching a screen for what seems like EVER.

You know, thinking more on this, even if you DON’T enable background syncing, you could at very least give us something to read (like the help or a feature list or screenshots of the UI we’re not allowed to play with until the sync is finished. Seriously, anything but what you have now. I should also point out that the warning about not touching the home button is also kinda working to your disadvantage. It makes me feel trapped and essentially forces me to throw in the towel…

One last comment: Have you thought about chunking the sync? Sync the most recent 100 bookmarks and then let us use the interface. Add a strip showing the sync status so we understand that it’s not complete. Then, as far as that first sync is concerned (which is, for me, the only barrier to entry) background sync isn’t even needed because I’ll be playing with the app while the sync just happens.

Oh wait, I just realized that by “background sync” you actually mean “blocking sync”. Am I right? If Yummy’s sync is only a blocking sync (meaning you have to always stare at this page, I’m afraid it has a long way to go to be something I use everyday which is sad because I use the hell out of other Pinboard clients but liked the sound of Yummy’s features.

First, a clarification: “background sync” means “continuing to sync when Yummy is not the foreground app.” After the initial sync you shouldn’t see the launch screen again unless you log out.

The reason it works as it does is partly through experience, partly out of necessity.

The launch screen is through experience. When the app didn’t have it, users would start syncing, switch over to the search screen and complain that Yummy couldn’t find bookmarks they knew they had. Of course that was because they hadn’t downloaded. A progress indicator made no difference.

The necessity is harder to explain. The short version is that the API that Delicious makes available for third-party apps is terrible. And the Pinboard API is the same but with many of the bits used for syncing removed. This means it’s hard to sync with Pinboard without downloading all the bookmarks, which takes time.

But my guess is that you have a lot of bookmarks or tags (in fact it’s the latter that has the most effect on performance). On my iPhone 5 I can sync nearly three thousand bookmarks and six hundred tags in less than ten seconds — even a couple of years ago most of Yummy’s competitors couldn’t handle much more than a thousand bookmarks.

Could Yummy do better? Absolutely! Most of the sync code is from 2008 and is optimised for Delicious rather than Pinboard. Also significant is that its use of memory and CPU usage is geared more towards the original iPhone instead of the 5s.

The challenge right now is resourcing — justifying and finding the time to make the changes.