I’ve mentioned this a couple of times in passing now, but I’m not sure if I’ve really made clear how cool this little feature is.

Delicious has recently added a neat new feature where you can import all the bookmarks that you Tweet. That’s great. What’s not so great is that when using the API — the thing that Yummy uses to get your bookmarks — the titles are all missing. It looks like this:

I’ve checked two of Yummy’s competitors, and they do exactly the same thing.

But in Yummy (version 2.6.6 and later), the same bookmarks look like this: 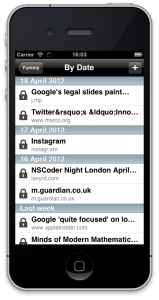 I hesitate to shout too loudly because it’s covering up a defect in someone else’s code but it’s just so useful that I couldn’t help myself this one time.