A new version of Yummy is on the way to the App Store.

Sadly, this version removes support for syncing with Delicious.com. The Delicious API has been broken since March so it feels dishonest to claim support when we’re not able to. I apologise if you’re affected by this change but I’m afraid it’s outside our control. Please contact Delicious if you would like to bring back this functionality.

I normally have a few words to say about the announcements that Apple makes at their annual developer conference, and this year is no exception.

The features of iOS 10 are (broadly) not hugely relevant to our current apps. It’s not possible for any of our apps to integrate with Siri; none really lend themselves to plugging into Messages. I feel that CameraGPS probably works best as a separate app rather than trying to plug into Maps (and I’m not even sure it would be possible).

But there are opportunities for new apps that — time permitting — may see the light of day. Watch this space.

At the time of writing, it’s my intention to make sure that all our apps continue to work on iOS 10. This is a much bigger update for CameraGPS than the others, as it relies on a feature that has been deprecated.

Having said that, from a user perspective it seems to be a nice release. Even the first beta is relatively stable, though not good enough (in my opinion) for your main phone.

The story is similar on macOS Sierra. Quick Calendar runs just fine on the first beta build (though I might need to tweak some of the colours!). It looks and works pretty much the same as El Capitan, which I mean as a compliment. I’m not sure how much I’ll use Siri. I think I’d be embarrassed to use it in a crowded office!

So, overall, Apple’s announcements don’t change very much for Wandle Software’s apps. But they still look to be good releases! Keep an eye out for the final versions in September!

Back in March I wrote about a Delicious API outage. I assumed that it was a short term problem caused by them moving web hosts. But it’s now July and the service is still not back, meaning that users of Yummy and other third party clients still see no error and no bookmarks. (Actually, it’s worse than that: half the web site seems to be broken, with dead images and links abound. I think the whole endeavour is over.)

At this point I see no point in maintaining Delicious support in Yummy. When you consider that the app is named after the site this feels a little crazy but pretending that Yummy supports Delicious when it can’t is starting to feel dishonest, even though this is not a problem of my making.

Because of this, I will shortly be sending an update to Apple that disables Delicious support. After this, it will only sync with Pinboard.in.

Sadly, Delicious seem to have broken their API when they recently updated their website. This affects all third-party clients including Yummy.

Without getting too technical, every API call tells Yummy that you have no bookmarks. This is why you don’t see any error message. This is also why there is no workaround that I can recommend you make nor any code changes that I can do to help.

Unfortunately this is entirely for Delicious to solve.

I will update if there are any developments. 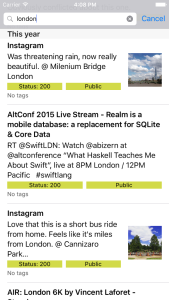 A new version of Yummy is on its way to the App Store and it features the following new features:

Both of these features are only present in the “pro” version (you can upgrade with an in-app purchase) on iPhones, iPads or iPod touches running iOS 9.2 or higher.

The thumbnails rely on an internal (non-Spotlight) index of all your bookmarks. It may take a while for all of them to be fully indexed if you have a lot. Normally the refresh process takes place after each sync, updating a few bookmarks each time (starting with the newest to the oldest).

Websites will need to support the OpenGraph standard for defining thumbnail images for them to appear. This is something that we hope to expand in future versions of Yummy, but this will always be dependent on the pages you bookmark to some extent.

Once a bookmark has been indexed, the thumbnail will automatically appear both in the bookmark view and in Spotlight searches. 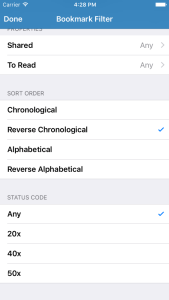 Over time, the bookmarks that you save become out of date, redirecting away to another page or just pointing to nothing — the famous “404 Not Found” error. Yummy can’t stop that process but it can help you find the affected bookmarks more easily.

It relies on the same indexing process used by to find the thumbnails. The HTTP status is shown in the bookmark list view and also in the edit bookmark screen (where it also show the “official” name for the code, in case you can’t remember what, say, a 503 is).

You can also filter by status code using the “Filter” menu introduced in Yummy 3.1. It’s split into three categories, broadly everything is okay (200 and above), permission denied (400 and above) and server error (500 and above).

If you’re thinking that these are pretty big updates for a point release, you’d be right. These have been ready to go since before iOS 9 launched. Unfortunately there was a bug in iOS 9 prior to version 9.2 that caused 64-bit iPhones and iPads to restart. (That is, it wasn’t Yummy that crashed but the whole phone. This is called a kernel panic.) We’re really happy to be able to release these new features but sorry it took so long. We hope you like it.

I just submitted a minor update to www.cut that improves its iOS 9 support.

It now works with side-by-side multi-tasking and fills the screen of an iPad Pro (I say fills rather than uses as it’s hard to make a couple of text boxes and three buttons to use a 12″ screen!).

Apple have been taking about a week to approve updates, so fingers crossed. (However, it’s only fair to note that it took several attempts to get 3.3 on the App Store.)

Yummy 3.2 is the second of our apps to get an update for iOS 9. Yummy, however, gets a much more significant update.

The bad news — if you can consider it like that — is that this update requires iOS 9. If you’re running Yummy 3 already, your device can run iOS 9 so this shouldn’t be a problem. (It’s a nice update. You should upgrade anyway.)

Yummy 3.2 is built using the latest developer kit and so supports all the latest devices, including the iPhone 6S, iPad mini 4 and iPad Pro.

In practical terms, that means you can use the split-screen multi-tasking on all the current iPads; and on the 6S and 6S  Plus, Yummy also supports 3D-touch short-cut menus on the home screen. (More 3D touch support may come in future versions.)

After you’ve upgraded to Yummy 3.2, the Spotlight integration should “Just Work.” It currently indexes the title and the notes field of each bookmark. (It seems unlikely that you’d be searching for the URL itself, so that is not currently added to the index.)

For bookmarks you can add parameters to make them more interesting:

Since Yummy 3, the bookmark list has shown the title, notes, tags and private/public/to read flags. Yummy 3.2 now allows you to customise what you see, so if you want to see the URL but not your tags, now you can. Go to the Settings screen to edit.

I just submitted it to Apple for review. Hopefully it should be available to download in about a week.

If you’re at all interested in how apps get built, you might like a blog I wrote about how Yummy synchronises favourite searches between devices using iCloud.

I think it’s useful to have a periodic review of activities. I haven’t always published them but, where possible, I will always try to.

I’m posting this update a little later than last year. I had every intention of writing this after the anniversary of the company and shortly after Apples’s developer conference where they announce their plans for the following year but life got in the way(!). As before, what follows is more ambition than commitment. Please keep reading the blog for what actually happens.

First, let’s run through what we achieved in the last year:

It’s been a busy year! Three new (if you include Yummy) apps and lots of updates. It’s fair to say that the next year won’t be quite so eventful. Time pressures mean that I have to be a bit more focused on the bottom line than I might appear to have been in the past.

Most of Wandle Software’s income still comes from Yummy, so work will continue there. Another feature update is in the works. It will take advantage of some enhancements in iOS 9 and bring some new tricks of its own. More news when details are finalised. There may also be a small update before that.

Next in terms of revenue is ShareEverywhere. I have ideas for some new sharers and, obviously, the plan is to keep the existing ones working (which is hard with so many third-party APIs to keep track of).

CameraGPS has not been as successful as I would have liked. I’ve not used it myself as much as I hoped I would and its reception, both in terms of sales and feedback, has been muted. I will very likely make an iOS 9 compatibility release if necessary. I also have some ideas about adjusting its business model.

In the wings are a minor update for www.cut and a bigger, albeit mostly cosmetic, update to Rootn Tootn.

The surprise hit of the year has been Quick Calendar. It has exceeded my (admittedly low) expectations for both downloads and revenue. Revenue comes from an entirely voluntary “tip jar” and a very pleasant surprise is both the number of people making a contribution and the fact that many are choosing something other than the absolute lowest amount.

As always, there are lots of ideas for new apps but there are no plans to launch any in the next year (though circumstances always change!).

Delicious have just announced that their site (and presumably API) will have a planned outage on Sunday. Yummy should continue to work but, obviously, won’t be able to sync.