For those who are not “in the loop,” WWDC is Apple’s developer conference, where they announce all the new software releases for the year. Usually the new updates are made available in September and October, but we get a preview of what’s coming in June.

So, what happened this year?

I don’t think there’s anything earth-shattering for Wandle Software. The improvement to SwiftUI should be beneficial, as should the enhancements to Catalyst. App Intents should make the Shortcuts that were included in Yummy 3.6 a little bit more useful.

I’m going to take a look at the new home screen widgets for iPhone, but I’m not convinced that this is the right place for Quick Calendar. You’ll also be disappointed that Apple did not allow widgets to be interactive, so the long wished-for ability to move back and forth between months is still not possible. Maybe next year.

My favourite new feature, PassKeys, is the beginning of the end for passwords, but there’s no immediate application of it in any of our apps.

All good stuff. We’ll continue to support the latest operating systems of course.

As a consumer, I’m most excited about the watchOS updates. The improvements to the Workout app look great. But — and this is important — I have not installed any of the new operating systems on my devices.

Please don’t install the betas on any of your devices!

I have not tested our apps on the new operating systems yet, and, even if I had, there has not been enough time to resolve any issues. Be patient.

The site has been quiet this summer, but it’s not due to a lack of activity behind the scenes. More that this time last year I trailed a few things that never came to fruition. Sometimes things are just not as close to shipping as you think.

But, as I type this, some things are very close to shipping. The latest update to Quick Calendar for iPhone, iPad and Apple Watch is currently with Apple for review and, hopefully, should be out this week. It’s entirely geared around Apple’s new operating systems, including a new Dark Mode and the ability to download to the Watch without first installing it on your iPhone. There will be another blog when this finally hits the App Store.

An update for Yummy is also in the works. While built using the new developer kit, I wouldn’t say the next release will be optimised for iOS 13. Other features will be more prominent. As this is long delayed, I want to ship first and then later create a more iOS 13 optimised version, including Dark Mode and enhanced shortcuts. I’m not putting a date on either of those updates right now but hopefully soon.

Finally, I do want to update Rootn Tootn at the very least to support the latest iPhone sizes. I mention this not because I have a timescale in mind but because by now you might think it has been abandoned. It has not.

In summary: unless something goes wrong, Quick Calendar this week; Yummy a few weeks behind that; Rootn Tootn… eventually.

What do the announcements at this years Apple Developer Conference mean for Wandle Software’s apps? In addition to a few more general thoughts, that’s what I hope to answer with this post.

But first, what was I hoping from Apple and what did we actually get? I didn’t put up a wish-list for WWDC this year mostly because my desires matched up mostly with the rumours, which was that this was going to be a “stability” update.

High Sierra has been a low point for Mac releases in my opinion, with the installer on both of our Macs failing (mine on the initial install, a point release for my wife). You might forgive the installer if the update had huge user-facing benefits but, as neat as ADFS is, there’s not much to see upgrading from Sierra. iOS 11 also had problems, but more like glitches than absolute failures. I’m not adding anything new here to the “stability” debate, I’m just saying that I see the same problems.

The rumours were not untrue. The first thing Apple talked about was performance. I guess for marketing reasons it’s difficult to come out and say “we’re fixing lots of bugs” so talking about speed improvements was probably smart. But the surprising thing was the number of other nice, new additions. There was not a single must have feature, but put together all the changes to both iOS and macOS look like they’ll be well worth having.

As a consumer, there are a bunch of nice things that I’m looking forward to. The most glitzy is possibly being able to have up to 32 people in a FaceTime call. (Yeah, it’s a big number, but anyone who has used Zoom or Bluejeans will know that it’s possible if not a great experience.) And the other stuff like being able to use your iPhone camera from your Mac is going to simplify a number of more convoluted workflows. On a day-to-day basis, the enhancements to notifications is likely to be the feature that helps us the most.

The stand-out feature as a developer has to be Siri Shortcuts. If you recall from the keynote, they’re a combination of commands that you can, for want of a better word, train Siri to understand mixed with some simple scripting (using an app that isn’t currently available outside Cupertino). Unfortunately, right now, playing with the iOS 12 beta, there’s really not very much you can do with them as no apps support them yet!

Overall, the announcements made don’t have a huge impact on Wandle’s apps. I’m looking into Siri Shortcuts to see if they can add any value and, obviously, I’m testing on the iOS 12 to make sure that everything still works as intended.

A few people have asked the following question, so I thought it was worth discussing in more detail here:

Why you would need a reminder to feed a baby? Don’t they let you know? 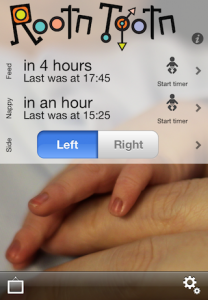 There are two simple answers to that:

There are other reasons too:

Even if you’re still not convinced, reminders are only half of the “baby feed timer and reminders” description used on the App Store. Rootn Tootn also records all your feeds, changes and anything else that you want. Suffice it to say that that log of events could be enough reason to use the app, even without the reminders!

Many thanks for your recent email. Unfortunately, your normally very accurate data mining and customer relationship management software seems to have turned up very much the wrong product recommendation for me.

You see, as great as the Itzbeen is, Wandle Software now has something even better for any mums (or moms) to be or those with recent new-borns: Rootn Tootn.

Not only do you always have your iPhone with you, making it much more convenient, but Rootn Tootn does more too! You can set as many timers as you like and rather than just telling you when your last feed and your next feed will be, it also keeps a history. And who’d want an Itzbeen with its green plastic when you could have a sleek iPhone and Rootn Tootn which allows you to use your own pictures as a backdrop?!

So I’m sorry Amazon, but I’m going to have to pass on your recommendation. Rootn Tootn is more useful, prettier and cheaper. Maybe you could recommend that next time? Take a look on the App Store…