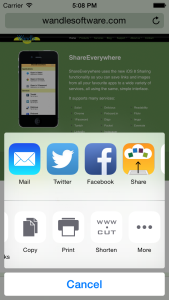 Apple releases the new version of iOS, the software that runs on your iPhone and iPad, on Wednesday. I’ve been running it on my iPad for a couple of months and my iPhone since last month and I’ve generally been impressed. It doesn’t have the massive visual change that iOS 4 or 7 had but there’s lots of changes that will make using iOS that little bit better.

Having said that, a lot of the new changes are developer focused so we won’t see a lot of the benefits until after iOS 8 launches and other developers can share their hard work.

Talking of which, we have a lot of work to share. We already blogged about ShareEverywhere, our new app launching at the same time as iOS 8.

As far as I know, all our apps currently work without problem on iOS 8. Of course they don’t currently take advantage of the new hardware or new software features, but they should continue to work as before. (If not, please let us know.)

We will be updating all our apps for better functionality on iOS 8. www.cut is getting very close to being available. Version 3.3 will hopefully be out by the end of the month.

Rootn Tootn and CameraGPS are a little further out, but both will be getting updates to better cope with the bigger screens and some of the other iOS goodies. More information nearer the time.

Yummy will get its biggest update ever — version 3 — some time after that.

So, in summary, everything should work right out of the gate, we have a new app and all our other apps will get updates to work even better with iOS 8.